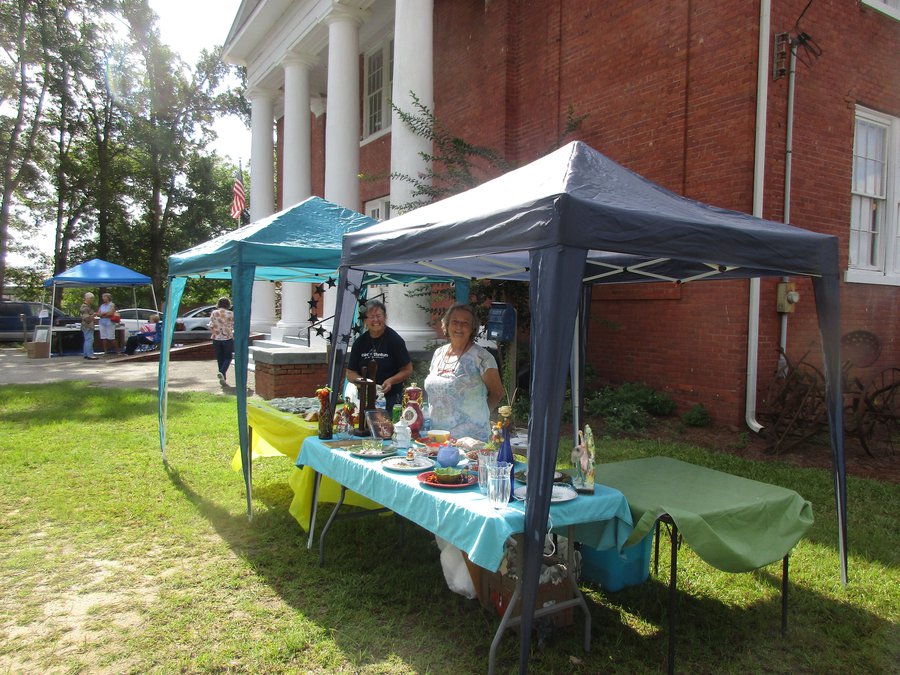 In an effort to increase awareness and as a fundraiser, the Candler County Historical Society holds an Open Air Market on the grounds of its museum, the 1921 two-story Metter High School building, the first Saturday of each month.

The Candler County group held its first Open Air Market the first Saturday in June. Another is scheduled for this Saturday, 8 a.m. until 1 p.m., outside the museum at 245 W. Vertia St. in Metter. Items for sale include baked goods, craft items, antiques and collectibles. A honey producer also worked the Aug. 4 market, and Waller said the society will welcome local farm and garden produce at future sales.

Citizens wanting to preserve the history of Metter and its county formed the Candler County Historical Society in 1981. At the time, the median age of members was 55, Waller said.

“When the group hit the ground, they started running,” he said. “They renovated the train depot. They added two sites to the National Register of Historic Places, they surveyed all homes in Candler County that were over 50 years in age and published three books in their first 25 years and sponsored a play on the history of Metter.”

After acquiring the old high school building with its red-brick exterior and tall white-columned porch, members spent many years renovating in hopes of turning it into a local history museum and art center.

In seven years, it has hosted a number of art exhibits. Many feature art by children in the local schools, but there was also a holiday show with prominent artists, he said. A flower show has also been held in the building. In addition to the Historical Society itself, the Metter Garden Club and now the Candler County Arts Council hold their monthly meetings in the museum.

The museum is open to the public at least four hours most Saturdays, and has an inventoried collection of more than 1,650 artifacts. Many are displayed in the three high-ceilinged former classrooms on the ground floor.

“Yet there are people in Candler County who do not know we’re there,” Waller told the Bulloch County group. “They do not know a gem is hidden over on Vertia Street.”

In one of the rooms there is a doctor’s office area, with furnishings donated by the late Dr. Robert Pence in memory of the late Dr. Kathryn Lovett. This includes an exam table with a wooden cabinetry base, other office items and an early 20th century wheelchair. Near it is a glass display cabinet filled with polished steel antique medical tools such as forceps, clamps and syringes, donated by Candler County Hospital staff members.

The museum has an extensive collection of World War II, Korean War and Vietnam War uniforms and related items and is still receiving items donated by the local Veterans of Foreign Wars.

Another room is packed with tools once used in farming and various trades. The museum holds both a small hand-operated printing press and a press used for forming bricks, as well as a collection of antique cameras. Two signed baseballs from the semipro Ogeechee League of the 1930s and 40s are also part of the collection.

Membership dues and traditional fundraisers provide enough money to maintain the building in its current condition and pay the utilities, Waller said. But now the society is trying to improve its presentation of artifacts, with display cases and identifying plaques, and members have longer-term plans to improve ground floor accessibility and install a small elevator to the second floor.

Meanwhile, the society’s median age has increased to about 75, Waller said. While the organization still has a large number of members on paper, about a dozen very active members keep it going, with about a dozen more to call on for fundraisers and other events, he said.

So the Open Air Market is one of several ways the Candler County Historical Society is attempting to raise funds without overtaxing this core group and with the added aim of involving more and younger people.

“In the past our organization has relied on cake sales, pancake suppers, Gospel concerts. These are tried and true methods and they have worked. …,” he said. “But now we have to show the community that it’s worth their while to visit, to join, volunteer and invest.”

One item the Historical Society sells directly to the public is a colorful coffee mug, in two sizes, with the “Everything ‘s better in Metter” slogan. The cups can be seen on the society’s Facebook page. The society also maintains a website, https://candlerhistoricalsociety.org.

Beyond Saturday’s Market, the Candler County Historical Society plans to have a presence at the new Ag & Arts Festival the Candler County Arts Council and Metter-Candler Chamber of Commerce are planning for Sept. 22 in downtown Metter.

The society is also planning a cemetery tour, “The Lore of the Lake” for Oct. 13 at Lake Church Cemetery near Metter.

The museum’s displays are open during the first-Saturday markets. On other Saturdays, the museum is open 10 a.m. until 2 p.m., but will open at other times by appointment, Waller said.

Candler County Historical Society meetings are held at the museum 4 p.m. the first Monday of each month, except holidays such as Labor Day. So the next one will be Sept. 10.

We look forward to hearing from you!